We were unsure whether we could make it to the airport due to the snow, and furthermore whether our flight would be delayed/cancelled.

Upon our arrival we found out that our flight had been cancelled, however the airline was able to re-route us to our destination. We arrived at Ostersund airport where we were greeted by Nina from Camp Dannevall.

Nina kindly stopped off at the supermarket, so we could get some food for our short stay. When we arrived at the cabin our friends from the UK helped us get settled in. 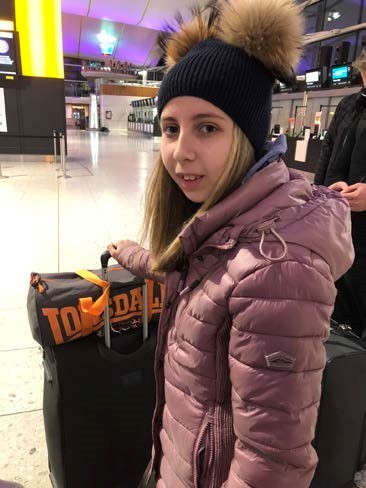 My first day and it was -27 outside and everything was covered in a blanket of snow. Our friends Matt T and Matt H showed me the sled which I was going to be using for the very first time, as back home generally we do not have enough snow to go out on a sled.

I had a couple of practice runs by coming down a steep slope without any dogs, to get the feel of how to steer and control the sled. Shortly after I was about to have my first sled experience with Bonnie and Blue who were Matt T’s dogs.

For my first run I was going to follow Matt H as he knew the trail. It was only a few yards in when I had my first experience of being faceplanted into deep snow. I quickly managed to get the dogs under control and headed back on the trail.

As I returned from my first run my friend Paul visited us at the camp with the two girls Shelby and Chevy, who I was going to be running at the World Championship Tournament.

My second run was a lot better and very enjoyable.

(First run with dog’s link below)

The second day at camp Nina the camp owner and a very experienced musher, took me on a training session on the back of a snowmobile, where we hooked up the sled.

I learnt a lot on this session which I would not have gained knowledge of back at home. She taught me basic skills as well as safety when put on the trail, like how to scoot; use a snow hook correctly; reaction time to potential problems that I may encounter on a run. (Snowmobile training link below) 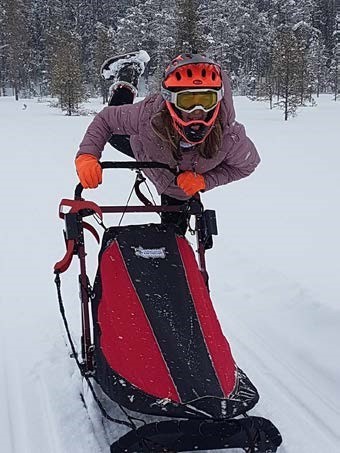 Today I got more sled experience by running Bonnie and Blue again round the trail on my own, by including most of the skills that I had learnt the day before.

This was the last day that I had for training with dogs as they needed to rest prior to race day.

Nina took me out on the snowmobile for further training to improve on the skills already learnt by putting me to the test. Again, vast knowledge was learnt, and I was starting to feel very comfortable on the sled.

It was time to leave our training camp facility to travel to the race venue in Sveg. On our travel we were greeted by a herd of moose were on the carriage way.

Upon our arrival we had to stop at the veterinary check where they checked the dogs’ passports and dogs to make sure they were in good health and not carrying any disease.

We drove to the race venue where we checked in and got set up with the dog stake out lines, where we had to borrow a drill with a very large drill bit to get the stakes in, as the ground was so solid we could not use a large mallet to hammer them in. 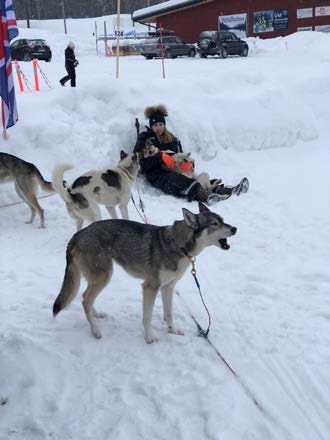 A couple of events began prior to the main tournament starting, due to how long they would be racing, which was a very long distance of 20km.

Later that evening we were to participate in the opening ceremony, where I was the flag bearer for Great Britain. 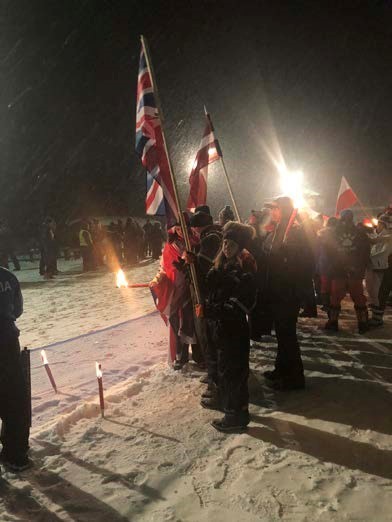 Race day has finally come, and I was nervous, but when I was helping teams to the start line and watching others on the trail my nerves soon faded to excitement. I was not due to compete until 13:36, so I helped handle dogs for the larger teams of up to 12 dogs who were out first.

My time finally came, and I was hoping for a nice, clean run as I did not expect too much as it was my first world tournament on snow.

Little did I realize how many steep inclines there was on the trail, until it came as a shock to me as I found the course quite demanding.

On my run I managed to overtake 2 competitors, but I was unsure as to how well I had done. I was delighted to find out that I was in 2nd place after the first run, but knew it was a long road in front as there were to more runs left. 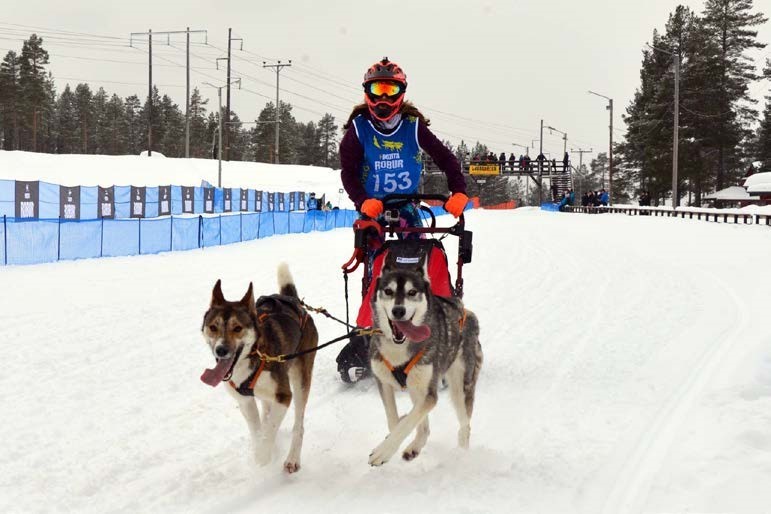 Day 2 and all to play for, I was not due out until 13:35 so again I helped the larger teams. It had been a chilly night with temperatures dropping to -20, and the trails had been freshly groomed and were a lot quicker than the previous day.

I had a great run where I was a lot quicker than the previous day, and fully prepared for the undulations of the trail. I was able to put further distance between myself and the competitors behind me, but unfortunately, I was unable to gain any time on the Polish leader.

Later that evening all the competitors were invited to the mushers dinner which was hosted in the marquee. 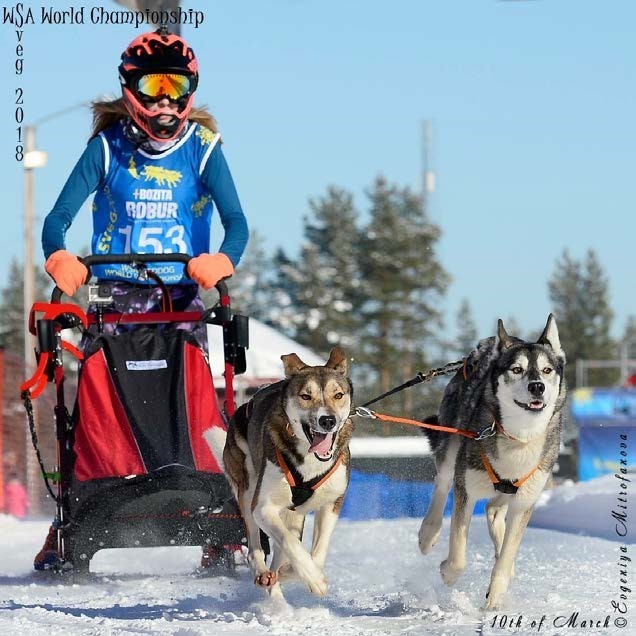 The final day of the tournament and I was lying in 2nd/silver position and was hoping for a great run. My start time for the final day was 13:42.

At the start line I was feeling good and confident. I was able to improve my time further and secured second position.

After all the racing had finished the presentation began where I was awarded a trophy for being the world junior silver medalist. I also was the first junior to represent Great Britain in the Word Sled Dog Association competition. 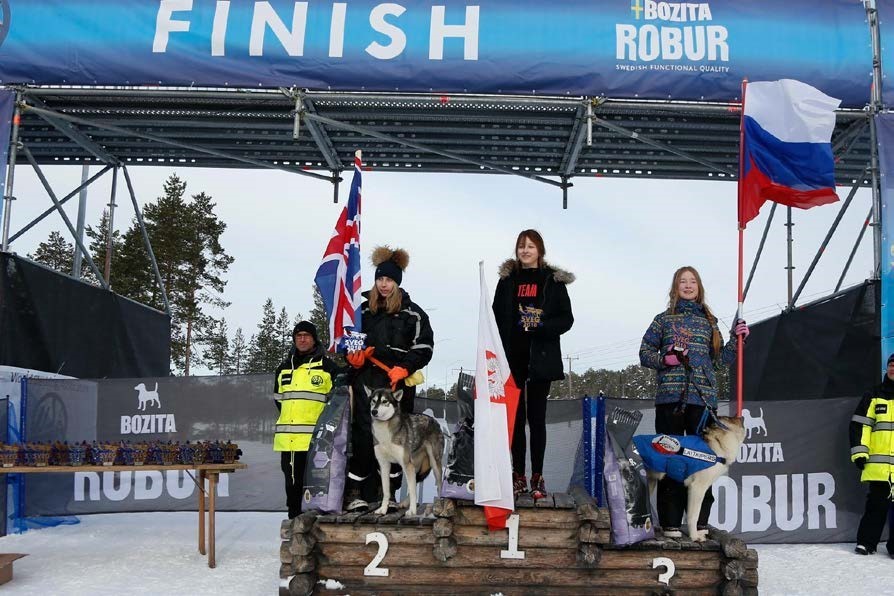 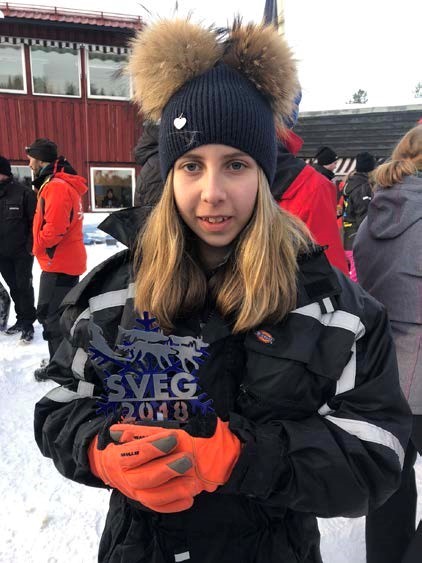