ROAD TRIPPING WITH THE G MAN

Firstly lets just take the time to reflect on how big Germany is….it’s massive and driving from one side to the other seems to take forever on the longest , straightest motorway in history. Luckily I had Gareth to regale me with his never ending views on Brexit, a word to the wise do not even mention the ‘B’ word to G, you will live to regret it! 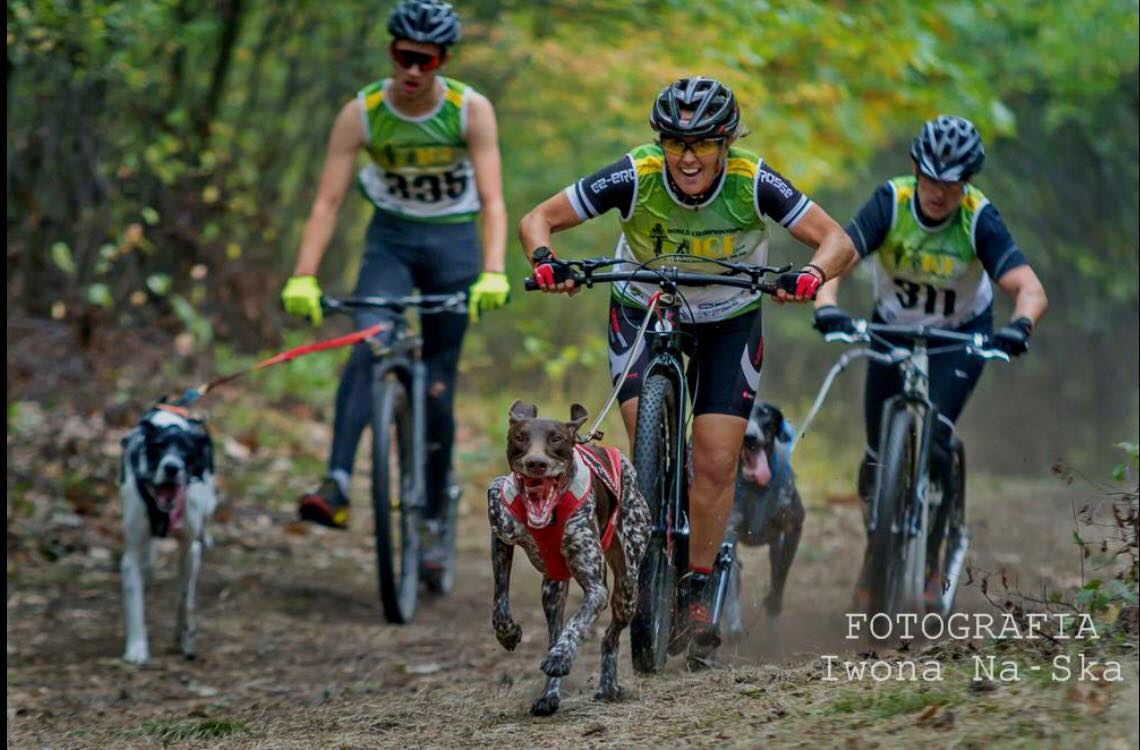 We arrived Wednesday evening after leaving Gloucester around 10am the previous morning. The rather over zealous parking attendant, directed us into our parking bay with the rest of Team GB and before we’d even got out of the mohome, team leader Claire was there to welcome us.

Thursday morning and we awoke to sunshine and a dry, large parking field. We sorted the dogs then took to the trail on the bikes, but dogless. The trail was a mixture of forest, sand, short climbs and lots of turns, it was nothing like it had looked on the videos and way more interesting. Next up was a training run with the dogs.

ICF allow competitors one training run, but in reality you could run more times as no one checks. It is however a bit of a free for all and the trail, can get very, very busy and this includes people walking with dogs, people walking with dogs the wrong way and head on towards you, people stopped in the trail and people and dogs racing past. ‘Trail’ doesn’t seem to be the universal language for get out of the way, but somehow we all manage. This was probably the biggest test of all for my young boy Marshall, who at 18 months had never experienced anything quite like this. I shouldn’t have worried Marshall sailed past all distractions like a seasoned campaigner. I felt well chuffed and secretly started dreaming of medals and podiums.

The rest of Thursday was spent cleaning the bikes, sunbathing, drinking tea and watching the parking attendants chase vehicles of all shapes and sizes on their bikes and ushering people into their allotted areas. This worked well and the stake out area was well organised and as everyone was parked by countries, there wasn’t the usual parking space reservation taping going on. The dog sports version of leaving your towel on the sunbed, is to use two chairs or whatever comes to hand and simply tape off a large area for your friends or team mates.

Friday bought more sunshine and sunbathing as well as vet checks and the chance to wander around the village, partake in some of the local delicacies, which seemed to be donuts and then as dusk was falling we gathered for a torch light procession and opening ceremony. Team GB were deemed to be too much of a fire hazard to be allowed a torch or maybe they’d given too many out to the home nation, but we remained torchless! After wandering around the street and waving at the bemused locals, we were herded into a very large marquee for the opening speeches. I have no idea what was said as couldn’t understand, but there was cake on the table so all was good. Not long after this had finished we were soon tucked up in bed and ready for the first day of competition.

Saturday and again blue skies, the parking lot was so dry it was turning into a dustbowl, but I’ll take that over mud any day. Bikes goes first and this starts with men and the senior age group, as I’m so old I go in masters 2, which meant I would be out around 10.15, it was quite warm by then and I did feel envious of those who got an earlier time slot. Soon enough though it was our turn and Gareth who was out and back from his run came and handled Marshall for me. Marshall was pretty mental, just so excited to run, which probably is his biggest fault at the moment as he expends lots of energy before he’s even left the start line.

We lined up in groups of 3 on the start line with each starting at 30 sec intervals. 5,4,3,2,1……and we were off, quickly hitting the woods and leaving the crowds behind. The first half seemed to go in a blur and I don’t think we’ve gone much quicker ever. Marshall was on fire, we did our first overtake pretty quickly and Marshall blasted on to hunt down the  next competitor. In all we passed 5 people day 1, there was a fair amount of traffic and several times I had to use the brakes to slow down as there were people in the way. Marhsalls’ speed dipped towards the end and he tried to got he wrong at the end, which was all my fault as in the training run I’d turned off before the finish, note to self for the future to not make that mistake again. So we did cross the finish line at snail pace, but that wasn’t a reflection of our run.

The timings were live, which is awesome as you know where you’ve come straight away and we were 3rd. I was stoked. Later I raced Magnus on the scooter who did his usual being overcome by the occasion and didn’t really pull until we got overtaken, which galvanises him into action and he then runs brilliantly. We got a respectable 9th. Lots of other Team GB members were in the medals, as well as having great runs, so the spirits were high as we enjoyed our mushers meal in the marquee. There was some brief dancing at some point in the evening, but being the serious athlete I am and the fact I’m old and anything past 9pm is a late one, we retired back to the mohome at a very civilised hour.

Sleep however was interrupted and I did lie awake in the dark thinking about what the next day may bring. Having been in the same 3rd spot last year in this race and losing it when disaster struck and my chain came off several times, I did start to wonder what might rob me of a medal this year. My head decided it was my lack of skill and I’d probably overcook a corner and my medal would disappear in the dust as I hit the deck. 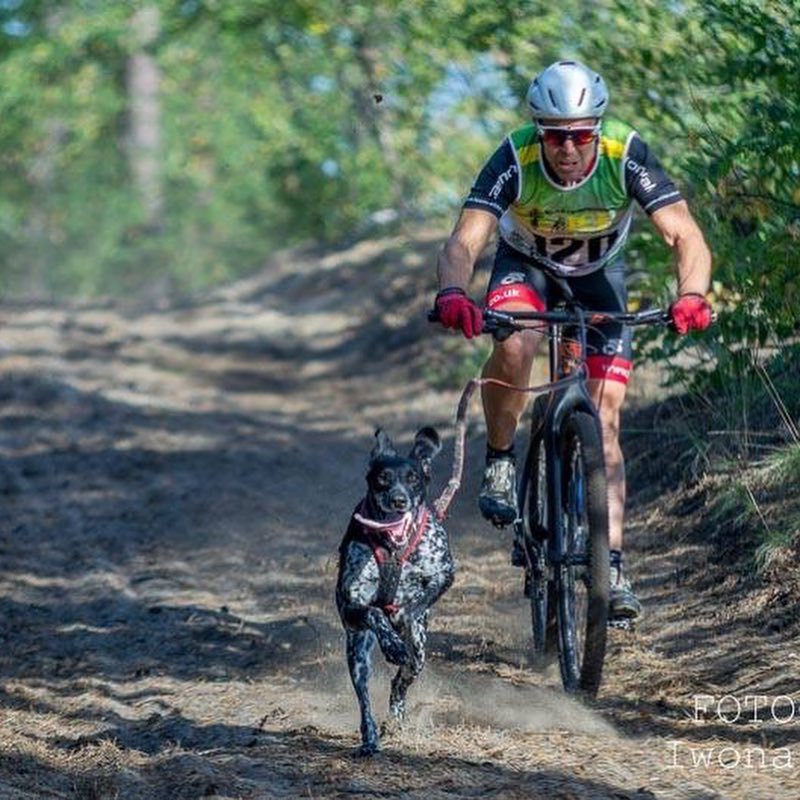 The final day of competition dawned and I sipped my cuppa trying my best to keep my nerves in check. There was no point trying to catch first or second so I opted for safety and to stay on and keep 3rd. This time Claire stepped up to handle the mad one, which he duly was and I did try dousing him in water to calm him down, which did nothing at all, more to work on back home for this season. Anyway countdown done and we were off. Again Marshall was unbelievably quick and it wasn’t long until we had the racer in front in our sights. Day 2 is in time order whereas day 1 is a random start, which meant the person in front was around my time, so we shouldn’t really be catching.

I was pedalling as hard as I could and breathing pretty hard, Marshall was stretching out those long legs of his and we were flying. Maybe too fast as each sandy turn I had to take the speed right off for fear of coming off, just stay on my head kept saying when my heart just wanted full throttle. We hit the half way mark and I heard the 2k timer bleep and the person in front by now could probably hear me puffing and panting. We turned a few more bends in the deep sand and the pull coming out was getting less, I realised my boy was starting to grow weary.

I mustered everything I could in my legs and reaching the final sand climb, Marshall really struggled to offer any pull at all, we nudged to the top and the person in front was out of sight. We were slowing, but Marshall was still trying. The last mile and he was done, he was still running, but I eased off as was out pedalling him and we cruised to the line. There was no point me pushing him to go faster, he had given his best and as a young lad, he still needs time to build more endurance and stamina.

So to the all important positions and myself and 4th place had identical times, but I was down as 3rd. In fact we were split by 10 hundreths of a second, that’s not even the blink of an eye. The medal was mine, but by the narrowest of margins. I spoke to Barbara Wirz from Switzerland who was in 4th and is a former winner at this event and always in the medals, she was gracious and humble the signs of a true champion and who said ‘I’m happy how my dog ran.’ At the end of the day whether you have a medal that hangs around your neck or not, if you’re dog ran well it’s hard to not feel happy.

Next came Maggie and the scooter, we had a great run and several passes, the big softie is starting to get it. Finally Gareth, Wendy and myself made up the B team for the relay, where Gareth ran, who handed over to me who scooted and then finally Wendy who biked. Last minute and I changed my mind to run Magnus, my thinking was that if he could cope with the crowds and noise of the relay he could probably cope with anything and he did. We ended up 3rd in our heat….happy days.

Prize giving was held up and we waited for what seemed an eternity, but after watching so many other people throughout the years, wrap a union jack around them and stand on the podium, it felt bloody fantastic to finally do it myself. I was not alone in this feeling as we had a whole host of people win medals. There was disappointment for the team when 2 athletes had time penalties added for dog issues, which effectively pushed both out of medal placings. This soured the general mood and took away what should have been a brilliant result for the team.

Finally well done to everyone and all of Team GB, massive thanks to Claire for her tireless work as team leader and the BSSF who enable the chance for us to race abroad. If anyone is interested or thinking about racing internationally, then do it, the experience is amazing. And my final thanks goes to my wingman and co pilot Gareth. He runs with Ela, who in G’s words ‘fluctuates between wildly fast to frustratingly overwhelmed.’ Yet even armed with this knowledge he still races, hoping his girl will one day run in the way he knows she can, but as it with most of us I suspect Gareth will be more over the moon if finally she ran to her potential rather than the having a piece of metal around his neck. Good luck for Sweden and Mr P whatever you do on that long drive to Scandinavia…….don’t mention Brexit! 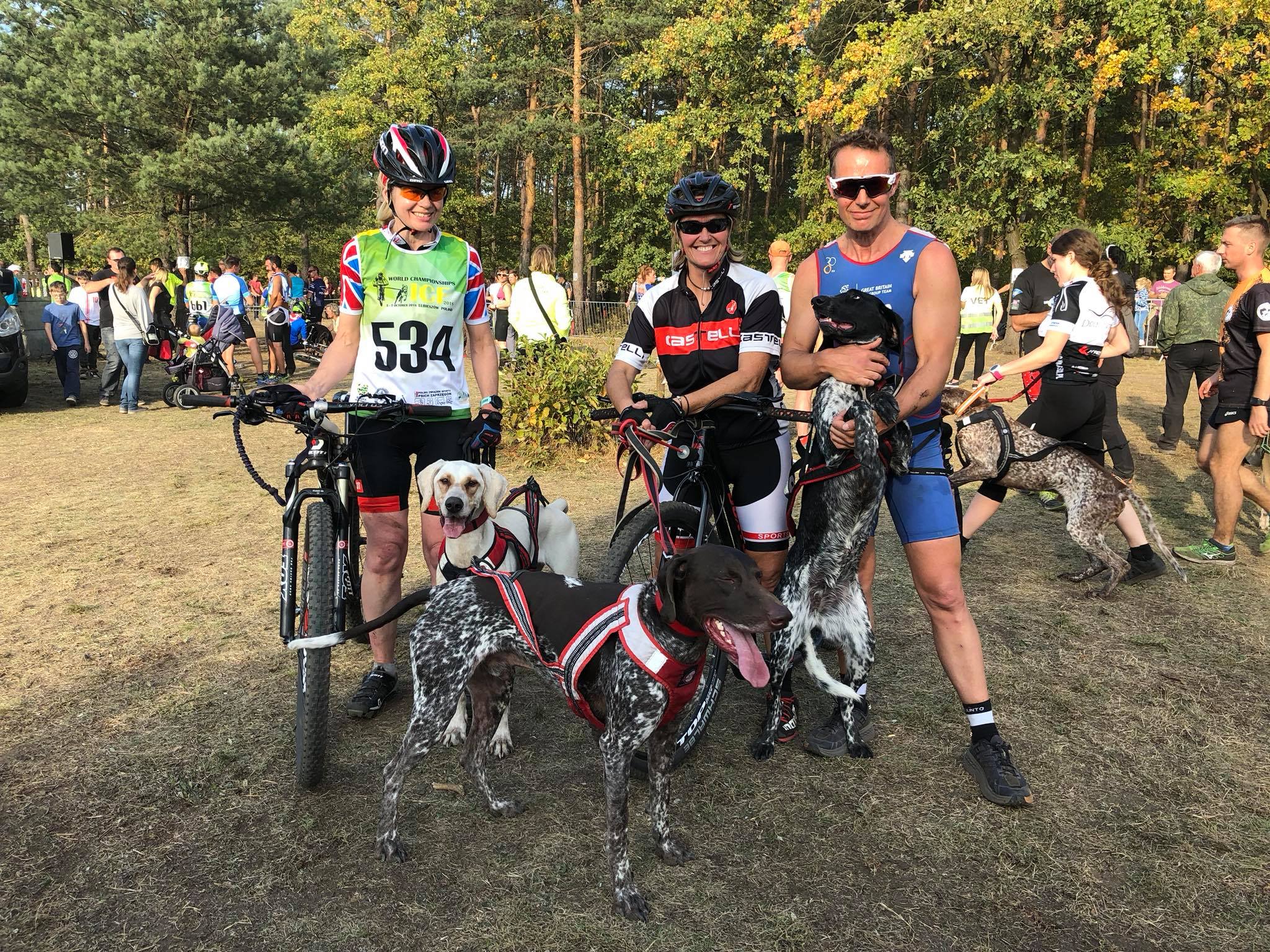